Gathering in solidarity, respect and unity

This banner will be displayed at Saint Mary-of-the-Woods at the Gathering in Solidarity this Saturday and into the future.

All are invited to join the Sisters of Providence of Saint Mary-of-the-Woods for a Gathering in Solidarity which will be held Saturday, Jan. 21, at 10 a.m. outside the Church of the Immaculate Conception at Saint Mary-of-the-Woods, Indiana. The gathering will coincide with the Women’s March on Washington held the same day.

Pope Francis says, “No one can remain insensitive to the inequalities that persist in the world.”

The principle of solidarity, or recognizing our interdependence with all of creation, has been at the heart of Catholic social teaching for as long as it has existed.

The Women’s March and similar events seek to create spaces where all are welcomed to stand in solidarity with those on the margins of our society. The movement encourages participation by all people who feel marginalized and their allies. It’s a space for all to come together and build a movement to sustain our work for justice into the future.

Organizers have emphasized this as not a protest but a march of solidarity and unity. It’s not about one person or one policy, but about an approach to being throughout the country. It is also to highlight nonviolence, building the Beloved Community and seeking to avoid internal violence of spirit.

Sister Tracey Horan, who ministers with the Indianapolis Congregation Action Network and helped coordinate the Gathering in Solidarity at Saint Mary-of-the-Woods, says, “We celebrate the richness of our differences and we will work for systems to honor these differences as well.”

While trusting in Providence, sisters see themselves as compelled to participate in advocacy work and collaborative efforts.

Sister Sue Paweski says, “It is Providence that sows the seeds of a promise for a better and brighter future for all people. What better way to celebrate Christmastide than the hoped-for Epiphany of enlightenment in Love that is the message of the birth of Jesus.” 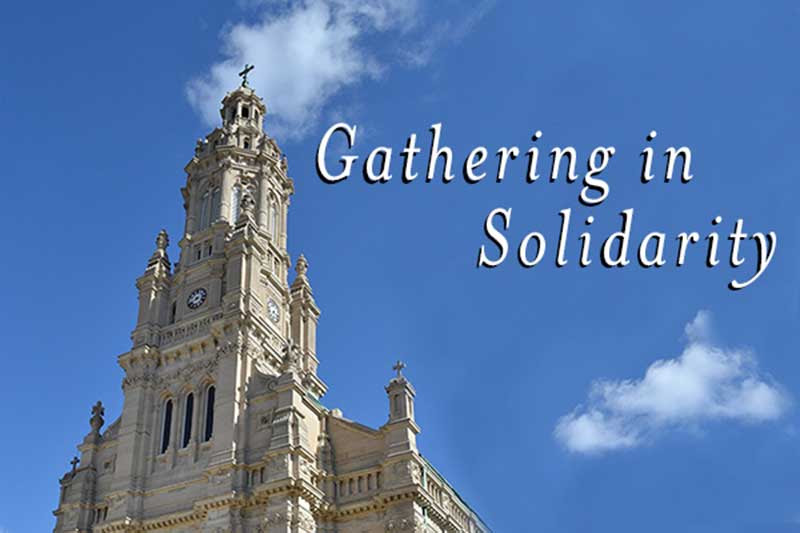 The history of the community, including foundress Saint Mother Theodore Guerin, inspires Sister Tracey in her work coordinating the Gathering in Solidarity event at Saint Mary-of-the-Woods. “As a Sister of Providence,” she says, “I am keenly aware of our legacy of educating women and the fact that our foundress, Mother Theodore, was shocked by how women in the U.S. were treated as ‘less than.’ Holding this gathering on our grounds, the very place where Mother Theodore lived and worked, feels so fitting. I imagine her present in the crowd, beaming on her ‘beloved Daughters of the Woods’ who echo her desire for equality.”

Sister Paula, who ministers as a co-director of the Providence Spirituality and Conference Center, speaks of the visitors they welcome into their space. “I think that, when we have people come here, to this center, whether it be for a wedding or a workshop or a retreat or a Sunday brunch, I think people know, I hope they know, what we stand for.” Whether it be advertising that the brunch and Linden Leaf Gift Shop serve all people or promoting the importance of fair trade, the Providence Spirituality and Conference Center promotes the values of the Sisters of Providence.

The motto of the Sisters of Providence, “Breaking boundaries, creating hope,” speaks of the importance of building bridges in the life of the community and its members.

These women’s marches and gatherings are not one group, not one unified effort. Participants are attending despite differences of opinion on specific platform items. Women are coming together to say that their voices deserve to be part of the conversation, that the principles of respect and unity are more important than precise uniformity.

Sister Tracey experiences the importance of breaking boundaries in her daily work of faith-based community organizing. “Daily I encounter the stories of people pushed to the margins by our systems and the depth of implicit bias,” she says. “I work alongside leaders in the Latino community to facilitate conversations about how we are called to act as people of faith in this moment. This gathering feels like the beginning of an answer to that question.”

Sister Paula sees a great deal of hope for the future. “I really believe that there are a lot of people who are thinking along the same lines,” she says, “that this event [the election] has really kind of mobilized folks to think about what they really value.”

Sister Donna Butler, who spends much of her time advocating for justice, says, “Two of the things I’m very grateful for are that I am a Sister of Providence, that we have a commitment to bring peace and justice to this world. And I’m very grateful that I’m in the place doing the ministry that I’m doing right now, of justice, even though it is very challenging.”

While it will take sustained action, the March this weekend is a good place to start, to forge connections, and to make a stand. Those gathered on Saturday will stand in solidarity with sisters and friends who will join in the March on Washington.

As the Women’s March on Washington and solidarity events throughout the country come and go, the Sisters of Providence remain committed to creating a welcoming space. A new banner, reading “All are welcome!” will be dedicated on campus. Sisters have committed to continued actions for justice on a systemic level, challenging ourselves to call our representatives more frequently. We hope you’ll join in.

Sister Emily TeKolste is in formation with the Sisters of Providence. She is a native of Indianapolis and has a degree in sociology from Xavier University in Cincinnati. Emily is passionate about justice with special interest in environmentalism and sustainability. You can follow her blog at solongstatusquoblog.wordpress.com. She currently ministers with the NETWORK lobby for Catholic social justice.

A short and simple reflection on each Sunday’s Gospel reading written by a Sister of Providence or Providence Associate.

Hard times? Praying for your loved ones?

You are not alone. The Sisters of Providence will light a candle and pray for you and yours.

This site uses Akismet to reduce spam. Learn how your comment data is processed.